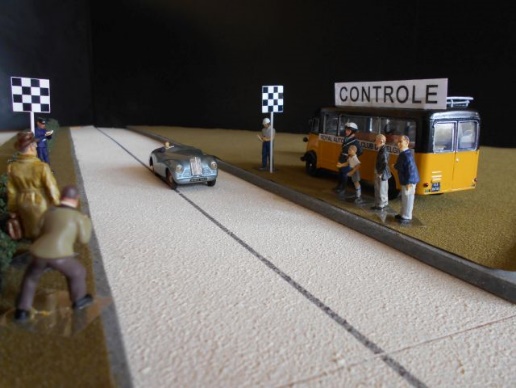 Chris Derbyshire runs us through the various models made of the Jabbeke record breaker Sunbeam Alpine.

In the late 1940s and early 1950s many manufactures took their cars to a very straight piece of dual carriageway (now the E40 from Ostend to Ghent) in north west Belgium, to set various timed records. The section of road was located near to the town of Jabbeke.

A flat, straight dual-carriageway with a good road surface, close to shipping routes to and from Britain, the location also benefitted from a close relationship between the Royal Automobile Club of Belgium and the RAC, the former were happy to close half of the road and take on the official timings.

In 1953 Sunbeam went to Jabbeke to set its own records.

The drivers were Stirling Moss, Leslie Johnson and Sheila van Damm who would set a speed of 120.135mph over a flying kilometer.

Few models exist of the car.

As of 2019 this is a current model from BHM. There is clear heritage in that this model uses the old Somerville Alpine model as its base

Limited edition model of 30 produced to order from 2003 (the 50th Anniversary of the Sunbeam Record). Using a converted Dinky Toy Sunbeam Alpine as a base model, a tonneau, fairings and number plates were added.

Each model was mounted onto a base, with the limited-edition number on the corner and with a signed certificate underneath labelled as – ‘Jabbeke Record 50th Anniversary’. Each car carries the number plate MWK 969

Limited edition of 4, using a converted Somerville kit to represent the record car. Each model had the fairings and number plates added. These models were built for four collector who collected models of cars driven by Stirling Moss. There were no bases, the models were not numbered or certificated.

Around 2012 Rodney Fox built up a Jabbeke Record diorama to display on the SHMAC stand at Race Retro, Stoneleigh, Warwickshire. Along with the Sunbeam the display also featured cars from Healey, Jaguar, Pegaso, Rover & Triumph all Jabbeke record cars.