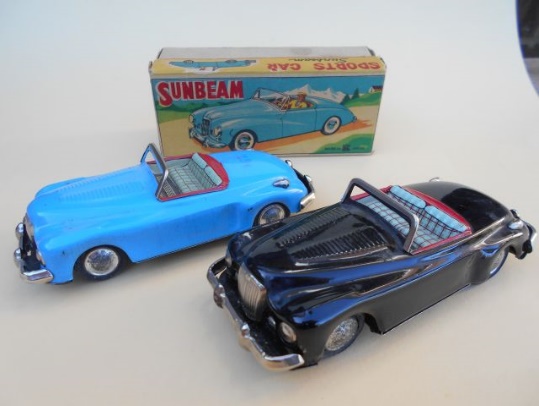 Chris Derbyshire runs us through the history of Sunbeam Alpine model cars, from Dinky Toys to more obscure models.

The most well-known Sunbeam Alpine model has to be that made by Dinky Toys. There were four versions two touring versions in cerise or light blue and two competition versions bearing race numbers in the same two colours. But there are many versions of these to look out for.

Note, that each box should have the correct coloured dot on each end flap, to match the colour of the car inside.

DINKY (UK) Ref no 107 Competition, 1:43 scale diecast, with a driver in white overalls.

Note, that each box should have the correct coloured dot on each end flap, to match the colour of the car inside the box.

There are a number of differences in this Dinky model.

Both the cerise or light blue body but with chrome wheels. These were only in production for around a year in the early 1960s, just before the model was dropped out of the Dinky catalogue. The cerise version has been the hardest to find. A light blue version sold on in November 2009 for a staggering £715 and a cerise one for £179 in August 2005, or a light blue one I found at Beaulieu in 2006 for £32!!! Prices are all relative it just depends upon how much you want it?!

The very very Rare one is the light blue Touring version with the wrong cream coloured wheels, instead of the correct dark blue wheels. Clearly a mistake on the production line. One for the real collector a Touring blue version with two types of wheels fitted, with a plain wheel on one end and a wheel on the other end of each axle. Seen at Sandown Swapmeet September 2011 at £90. A genuine model, a Friday afternoon model, something someone has messed about with – who knows?

Remember if your mint model does not have a have a box, buying a nice mint empty box will more than double the value of your model.

Even an empty box will sell for good money. Make sure the box is complete with its end flaps and has the correct colour spot for the model inside.

Reproduction boxes are around and regularly seen at swapmeets and on Ebay. When you see one they will have a slight yellow hue to them and just look too good/new.

BANDAI (J) Ref no 29, 1:30 scale, tin plate body made in Japan, with friction motor working the back wheels.

Simple card box with a No 29 stamped in one corner, separate coloured top.

Wheels have Chrome hubcaps. The model comes with up with a simple interior or roof down with a printed seat interior.

If you are after the rare ones the early dark green coloured model is the hardest one to find. But if you want to go total anorak try looking for these with a round gold coloured sticker on the bonnet which says – Tomte Furniture Friendly.

Tomte also released some of their models with hand painted detail, e.g. the grille and the seats. Various body colours are known to exist, more details can be found on http://www.tomte-toys.com/tomte/maltebiler.html

The best model of a 1950s Sunbeam Alpine. if a model has been made from a kit it could appear in any colour, but Somerville only released this model in three colours, Sunbeam only made the real Alpine in four colours – Ivory, Red, Alpine Mist and Sapphire Blue. The number plate MWK 969 is actually that on the Jabekke record car, a car never made by Somerville.

If you are after the rare one there is one in ivory colour released at Modelex 1995 (a model show held at the Motorcycle Museum, Solihul, Birmingham). Only 25 certificated models were made and sold at the show by JM Toys (Waterlooville, Hants). By releasing this ivory coloured model Somerville could now not release it into their range. The number plate is MWK 969.

This model uses the old Somerville casting and re-released it as model or as kits by Promod Ltd (UK). Only 100 built models will be made and an unlimited number of kits are available. As of these models are still available contact Graham Ward at Promod: www.promod-diecast.co.uk

Startex were the precursor to Scalextric. The model comes in various colours and sometimes with plain all black wheels or with spoke pattern. The windscreen is very vulnerable to breaking but modern replacements are available. The grille also goes missing but replacements are not available. This model does come with a box and this will increase its value by quite a bit. Inside each box should be a black & white paper information sheet. This will increase the value even more!

Also known as BKL Developments, Poole, Dorset. Barry Lester was one of the early pioneers of white metal model cars. It’s a dreadful casting, and it will need a lot of work to get it looking good. this model might appear in any colour. –on.

This is a copy of the Dinky Toys models with a white metal chassis. this model could appear in any colour.

Limited edition of a 1953 Alpine it’s believed around 100 were made. Cast by GTA in Devon and looks like a copy of the old Dinky Toys. Available as a built model only and put together by SMTS. Has a soft top

Issued as a freebie in cereal packets. It has SUNBEAM across the boot to help to identify this one. Various colours were released.

Listed as a 1951 Sunbeam Alpine Mk1 ’51 (open). Their 1996 catalogue shows a photo of a real car. I have never seen this model so cannot confirm if it was released or not. No photo.

A very crude representation of the real car, the main clue is the louvres on the bonnet. Simple box with a coloured lid with the title New Sunbeam Sports – friction motor with siren – !!!. The friction motor works the rear wheels. I don’t hear any siren on the one I have.

Created for Sunbeam Talbot owners in Australia. It is believed that less than 12 were made. Cast in bronze, you can make this RHD or LHD by moving the driver figure from the right to the seat. The model sits on a bronze base complete with a tree and bushes finished off with a ‘coin’ bearing the Sunbeam Talbot logo. This model weighs in at over 1 kilo, despite it being hollowed out underneath!!

John Day was one of the pioneers of white metal models back in the late 1960s early 1970s. He made a huge range of models but then due to various reasons disappeared from the scene until re-emerging with his Vehicle Scenic range for use on model railways layouts. John passed away in 2006. 2005–?

Made by Trevor White of a 1953 Alpine. A very crude copy of a Somerville model with the addition of the rear wheel spats. Grille and bumpers are cast in. No /windows included in any TW kit. Requires quite a bit of work to make it look anything decent. It is believed that only 10 were ever made?

Chris Derbyshire
All details correct as of October 2018