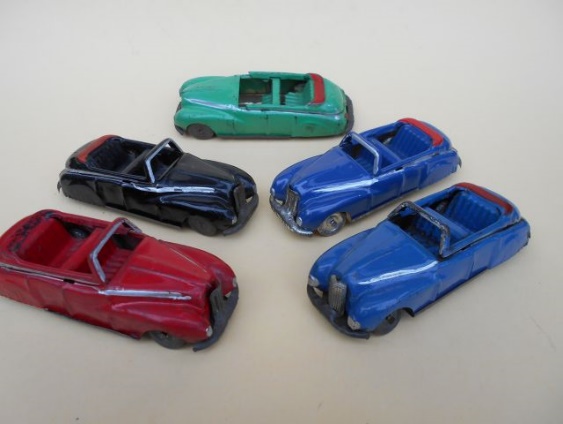 Chris Derbyshire runs us through the history of Sunbeam Talbot Drophead model cars.

This is a tin plate model with the body, floor, seats and wheels all in tin plate. Tin was in short supply after WW2 so these models were often made from old oil, cocoa & tobacco tins. Look inside to find out if yours was!!

The floor & wheels have been adopted from the saloon version with a bumper on each end with the number plate IXL 1951 indicating the manufacture and the year of production. Note that there are four doors pressed out, when in reality there were only two doors on a Drophead. The seats and raised tonneau are pressed out from the same sheet of tin used for the body. The silver stripe looks like it has been added later. Sadly, it is original and is often very wobbly and uneven. Finally, be aware that the windscreen and grille are very vulnerable and likely to be missing.

The best model of a 1950s Sunbeam Talbot Drophead. Clearly if a model has been made from a kit it could appear in any colour, but Somerville only released this model in four colours.

This model uses the old Somerville casting and re-released it as handbuilt model or as kits by Promod Ltd (UK). Only 100 built models will be made and an unlimited number of kits are available.

As of 02/2019 these models are still available, contact Graham Ward at Promod

In 2000 it was announced that a Mk2A would be released as a limited edition “Somerville Club” model. This never actually happened. Somerville never made a Mk2A. But by removing the rear wheel spats it’s possible to change the model from a Mk2 to Mk2A

Made by Trevor Wright this is a limited edition white metal kit of a 1953 Mk2. It is believed that only 10 were ever made.

This model has definitely been “borrowed” from a Somerville casting. All the chrome i.e. the bumpers, grille, quarter lights and trim are all cast into the one-piece body. The casting is crude and needs a lot of work to clean it up. Clearly the model can be painted in any colour.

Their catalogue showed a photo of a real car, that was not actually and S or from 1957!!??

As a resin kit clearly, you could paint it any colour